Objectives/Hypothesis: Chronic sinusitis is a condition affecting millions of individuals each year. Recent findings indicate that chronic rhinosinusitis is a response to fungi mediated by the eosinophil in some of these individuals. We report a case of eosinophilic fungal rhinosinusitis of the lacrimal sac, an entity not previously reported. Study Design: Case report. Methods: A 69-year-old man presented with a 1-cm cystic lesion in the right-side medial canthal region. This lesion was fluctuant, and mucoid material was freely expressed from the medial canthal area. Endoscopic examination revealed bilateral nasal polyps anteri­orly and superiorly with mucopurulent drainage from both maxillary sinuses. He had undergone three prior sinus surgeries and two prior lacrimal cannula­tions elsewhere. A computed tomography scan showed opacification of both maxillary sinuses, eth­moid sinuses, and the left sphenoid sinus and moder­ate thickening in the frontal sinuses. There was sig­nificant soft tissue prominence in the area of both lacrimal fossae with erosion into the medial orbit. The patient underwent bilateral endoscopic revision eth­moidectomies, middle meatal antrostomies, sphe­noidotomies, frontal sinusotomies, and endoscopic right-side dacryocystorhinostomy at the Department of Otorhinolaryngology, Mayo Clinic ( Rochester , MN ). Results: At the time of surgery, massive amounts of thick mucoid material were aspirated from both lac­rimal regions. The aspiration of the lacrimal duct on the left side was sufficient treatment, whereas the dacryocystorhinostomy was necessary to decompress the cyst of the face on the right side. The material aspirated was allergic mucin, and the patient met the criteria for diagnosing eosinophilic fungal rhinosi­nusitis. The patient was started on a regimen of anti-fungal nasal irrigations postoperatively and has done well in follow-up. Conclusions: Although never previ­ously reported, eosinophilic fungal rhinosinusitis can occur in the lacrimal sac.

Chronic rhinosinusitis is an inflammatory disease of the nasal and paranasal mucosa that persists and is symptomatic for longer than 3 months. Allergic fungal sinusitis was first described by Millar et al.4 in 1981. In 1983, Katzenstein et al.5 proposed the term "allergic as­pergillus sinusitis" after retrospectively reviewing surgi­cal specimens from 119 cases and finding a new form of sinusitis in 7 cases. The histological diagnosis in their series was based on the triad of 1) sheets or clumps of necrotic eosinophils, 2) Charcot-Leyden crystals, and 3) noninvasive septate fungal hyphae within the mucin. The term "allergic fungal sinusitis" was introduced by Robson et al.' in 1989. Based on 16 patients, Bent and Kuhn' proposed adding other criteria to the diagnosis of allergic fungal sinusitis, including atopy. Other authors have ex­cluded atopy as a diagnostic criteria for allergic fungal sinusitis because of lack of evidence of its importance in the pathophysiology of the disease. In 1999, Ponikau et al.9 proposed the term "eosinophilic fungal rhinosinusitis" to describe the role of the eosinophil.

Recent findings indicate that chronic rhinosinusitis is a response to fungi mediated by the eosinophil in some of these individuals. We report on a case of eosinophilic fungal rhinosinusitis of the lacrimal sac, an entity not previously reported.

PATIENT AND METHODS
The history, treatment, and outcome of the patient were evaluated prospectively. A literature search of Medline was completed to assess whether any previously reported cases of eosin­ophilic fungal rhinosinusitis of the lacrimal sac existed, and none was found.

CASE REPORT
A 69-year-old man presented to the Department of Otorhi­nolaryngology of the Mayo Clinic ( Rochester , MN ) with the chief complaint of recurrent nasal polyposis and right-side lacrimal obstruction. The patient had a long history of nasal polyposis and had undergone three previous polypectomies and sinus surgeries. In addition, he had a history of a cystic growth in the right-side medial canthal region. Biopsy had been performed for this by the ophthalmology service elsewhere, with no evidence of malig­nancy. He had also undergone two previous right-side nasal lac­rimal cannulations secondary to dacryocystitis. His medical his­tory was significant for asthma diagnosed approximately 5 years earlier. Clinical examination at presentation revealed an en­larged, 1-cm cystic lesion in the right-side medial canthal region (Fig. IA). When pressure was applied to the mass, it was fluctu­ant and mucoid material was freely expressed from the lacrimal puncta. There was no mass in the left-side medial canthal region. Endoscopic examination revealed bilateral nasal polyps with mu­copurulent drainage in both maxillary sinuses. Cultures of both nasal cavities were obtained in the office, and there was no evidence of fungal growth. Allergy testing was obtained, and results of skin testing for more than 40 common allergens (in­cluding 10 fungal allergens) were negative (Table I). A coronal computed tomography (CT) scan of the sinuses demonstrated complete opacification of both maxillary sinuses, the ethmoid sinuses, and the left-side sphenoid sinus; moderate thickening of the frontal sinuses; and increased soft tissue in the upper nasal cavity consistent with nasal polyposis and pansinusitis (Fig. 2). There was significant soft tissue prominence in the area of both lacrimal fossae with erosion into the medial orbit (Fig. 3). The patient underwent bilateral revision endoscopic ethmoidecto­mies, middle meatal antrostomies, sphenoidotomies, frontal sinu­sotomies, and an endoscopic right-side dacryocystorhinostomy. At the time of surgery, massive amounts of thick mucoid material were aspirated from all of the sinuses. The left-side lacrimal duct was aspirated clean. Nasal polys were removed from around its nasal opening. The right-side lacrimal duct system and sac were opened endoscopically in intranasal fashion, and a large amount of tenacious mucin was identified there as well. The nasolacrimal duct on the right side was stented with a Silastic tube that is still in place. Histopathological examination showed eosinophilic mu­cin, tissue eosinophilia, and disintegrating, noninvasive fungal forms in both the sinus and lacrimal sac specimens. There was no histopathological evidence of tissue invasion by fungi in any ar­eas. Hematoxylin and eosin (H&E) stains from the right-side lacrimal duct and sac specimen revealed eosinophilic mucin with clusters of necrotic eosinophils and Charcot-Leyden crystals (Fig. 4). Chitinase immunofluorescein stains showed various fungal hyphae (Fig. 5). No intraoperative cultures were obtained. 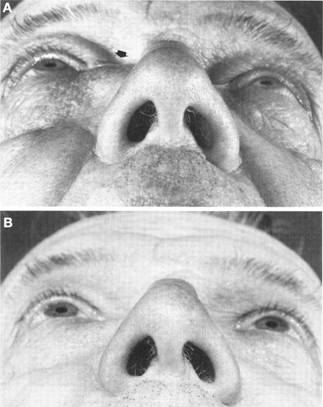 Fig. 1. (A) The patient has a cystic mass in the right-side medial canthal region (arrow). (B) At 1 year after surgery, the cyst is gone.

Postoperatively, the patient was started on a regimen of 100 mg/1000 mL itraconazole nasal irrigations and given a steroid taper for 2 weeks. He has also resumed topical nasal steroid spray once a day at standard dose and saline irrigations twice a day, as he did before surgery. He has been followed closely for 2 years postoperatively, and he has had no evidence of recurrence of nasal polyposis or lacrimal obstruction. The cyst in the right-side me-dial canthal region has resolved (Fig. 1B). There has been no cystic mass in the left-side medial canthal region. The patient has had no symptoms of nasolacrimal duct obstruction or epiphora.

DISCUSSION
We present a case of eosinophilic fungal rhinosinus­itis of the lacrimal sac. A thorough review of the literature since the early 1980s failed to yield any previously pub­lished reports describing this phenomenon. However, there are numerous reports in the literature of lacrimal sac mucoceles and "soft tissue opacities."1O-1L Because eosinophilic fungal rhinosinusitis is a recently described and recognized diagnosis, it is possible that some of the aforementioned cases of lacrimal sac disease could be due to this disorder.

The lacrimal sac lies in an oval fossa approximately 15 mm in height and 10 mm in width. The front end of the fossa is delineated by the anterior lacrimal crest, which is formed by thick bone from the frontal process of the max­illa. The rear end of the fossa is bounded by the posterior lacrimal crest, which is formed by thin lacrimal bone. The inferior end of the lacrimal sac tapers as it enters the nasolacrimal canal formed by the maxillary, lacrimal, and inferior turbinate bones. Within this bony canal the naso­lacrimal duct travels for a distance of approximately 12 mm. It continues beneath the inferior turbinate as a mem­branous duct for another 5 mm before opening into the inferior meatus. The duct orifice is often covered by a flap of mucosa (Hasner's valve), which is thought to prevent nasal secretion reflux.'3

Our patient had significant nasal polyposis that, we postulate, obstructed the duct orifice and caused reflux of eosinophilic mucin into the nasolacrimal system. This ex­tensive polyposis resulted in distal obstruction and subse-