What is the Cause of Sinusitis? 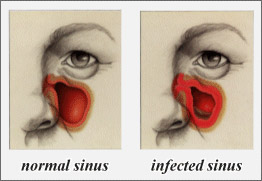 Sinusitis may be caused by anything that causes swelling in the sinuses or keeps the cilia from moving. This can include changes in temperature or air pressure, excessive use of decongestant nasal sprays, smoking, and swimming or diving. In addition, certain growths known as polyps can cause a blockage to the sinus passages.

Sinusitis caused by a bacterial or viral infection results in a sinus infection. Sinus infections may occur after a cold because the cold virus attacks the sinus lining, causing them to swell and narrow. In response to the virus, the body produces more mucus, but this gets blocked in the swollen sinuses, creating a good place for bacteria to grow and ultimately lead to a sinus infection.

How do you treat acute sinusitis?
An antibiotic may be taken for ten to fourteen days. Though many patients begin to feel better within a few days after beginning the antibiotic, it's important that the antibiotic be taken until it's completed. A decongestant may also be recommended to help alleviate sinus pain or pressure.